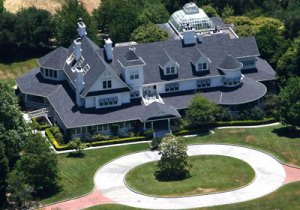 There was no work done on the rewrite at all yesterday because I got to do something I honestly never I thought I’d get to: visit Skywalker Ranch.

If the name sounds unfamiliar, it’s the compound in Marin County (the one north of San Francisco) where George Lucas had set up Industrial Light & Magic after the success of STAR WARS.  ILM has since moved to the Presidio in SF, but Skywalker Sound and a lot of the administrative offices are still there.

A mom of another student at V’s school works at Skywalker Sound.  In fact, she won an Oscar earlier this year for Best Sound Editing for INCEPTION (her and two other guys).  One of the silent auction prizes at our school’s spring fundraiser was a private tour of the grounds.  Since there was no way we could afford that (I think it went for something like $275), I ran into her about six weeks ago at a school function.  I casually mentioned missing out on the opportunity to take part in the tour, to which she said she’d see if she could arrange something.

A few weeks later, I got an email saying that if we could be there during her lunch hour, she’d be happy to show us around.  Deal.

Our dilemma now was whether or not to bring V, because that would mean taking her out of school early.  My first reaction was it would be worth it, but the more we discussed it, we decided that this wasn’t an amusement park-type environment, but more an actual production facility, which your typical 8-year-old would probably find boring.

But I had heard they had a gift shop, so we’d get her something.

The Ranch is way out there on Lucas Valley Road, and it’s quite easy to drive right past it if you’re not looking for it. No signage; no big-ass Star Wars logo anywhere.  Just a nondescript driveway off a quiet country road.

You get through the gate and up to the security guard booth.  While the guard was contacting our friend, I couldn’t help but notice the EMT-type patch at the top of her sleeve.  Like a fire department logo, except with an X-Wing Fighter in the middle.  Cool.

We got our map and directions where to go, then drove ahead.

My first reaction was “It’s a lot smaller than I expected.”  And it is.  It’s not the sprawling estate I thought it would be.  Everything was a lot closer than the map indicated.

We passed the ball field, then the horse corral, the organic garden on the other side of the road, and then pulled into the Tech Building parking lot.  Our friend was waiting for us and took us inside.  The first thing you’ll notice is the abundance of movie posters for US films but in foreign languages.  They’re all over the place.

If you’re into sound or audio production, you’d feel as if you’d died and gone to heaven.  There are studios of varying size throughout the whole building, each equipped with sound boards that would seem more appropriate for the Starship Enterprise.  What was also cool was that the larger ones had a theatre-like design, so each room got the maximum results for what was being worked on.  We also got to see one of the humongous rooms that they would record orchestras in, complete with adjustable walls so you can actually tune the sound of the room.

Our friend is currently working on the sound for COWBOYS & ALIENS, but she didn’t show us any footage.  The movie comes out in July, and all of the post-production will be done up until just a few weeks before the release.  We found that very strange, expecting there to be more lead time between wrapping it up and the release, but apparently that’s become common practice for most studio films these days.

Although we were only in it for a few minutes, the screening room was simply incredible. About 300 or so seats with a nice big screen.  Apparently they were setting up for some kind of demonstration later in the day, but we got to see a short snippet of a scene from RAIDERS OF THE LOST ARK in black and white, but with only the dialogue sound.  No music, no effects; just “throw me the idol, I throw you the whip.”  It sounded strange to hear it like we were on the set.

Then we stopped in the Foley Room, where traditional sound effects can be created. Walking on certain types of surfaces, dropping, smashing or manipulating something to get a particular sound.  Very similar to how they did sound effects for old-time radio.

We were then asked if we wanted to see the main building, which is the one in the photo above. Very Victorian-era architecture, reminiscent of a New England beach house. In some of the cabinets just off the main door are the only proof that George Lucas is connected.  On display are some lightsaber handles (I’m fairly certain they’re the originals), the fertility idol from the opening sequence in RAIDERS, the Crystal Skull, an AT-AT model from EMPIRE, Indy’s hat and whip (also originals, I assume) and what I thought was incredibly cool – Charlie Chaplin’s cane and derby.  I’m pretty sure Lucas could afford to buy them.

Our first stop was the library, which is two floors, with a wooden spiral staircase and a gigantic stained glass window in the middle of the ceiling.  No matter what department you work in, you can come here and do research on whatever you’re working on to get the utmost in accuracy.  I asked if George’s office was in the building.  It is, but I thought it would have been presumptuous to ask if we could see if he was there.

I asked if the gift shop was here, but it was in another building.  We zipped over to another building.  The gift shop is a whole lot smaller than I expected.  We got a t-shirt for V, one of those EMT-style shirts for me (Millenium Falcon in the logo – nice!) and a pair of lightsaber chopsticks (Luke green and Darth Maul red, which also have magnets in the bottom for the complete double-bladed effect).

Our friend had to get back to work, so we thanked her and headed home.  On the drive back, K asked what I thought about what we had just done.  I said I was really glad we did it.  I also confessed that I couldn’t help but think I’d love to go back someday when they’re working on a film that I wrote.

That would be quite awesome.