Originally, this post was going to be about the multiple changing of protagonists in PSYCHO (which is another great potential future topic), but the more I read about the film and thought about the impact it’s had since being released way back in 1960, it triggered a totally different train of thought.

Every once in a while, when a classic film is brought up in some context or another, the phrase “That could never get made today” will get thrown in. After the recent death of Gene Wilder, his talent was lauded via the mention of several of his most well-known roles. Willy Wonka. The Waco Kid. Victor Frankenstein (“That’s Fronken-steen.”). His performances were vital parts of each film, which no doubt contributed to making them “classics”.

But, as always, it starts with the script. (Incidentally, I don’t think Wilder gets enough credit for co-writing YOUNG FRANKENSTEIN.)

Examining the stories being told, each one has something truly unique about it, and then some. The writer (and subsequently the filmmaker) wasn’t afraid to take a chance and try something completely new and different. Sadly, the studios today aren’t as open to it. Better to play it safe then take too big a chance, which is why we’re seeing so many remakes and re-imaginings. Of course, that doesn’t always work out either (e.g. 2015’s PAN, the recent BEN-HUR remake).

While there are always original and innovative scripts floating around, it’s a lot of time, effort and money to make a film. The only recent original film I can think of is SWISS ARMY MAN, which I admit I haven’t seen yet.

Who hasn’t read a “truly original” script or about one getting a lot of attention, but a lot of the time the writer will go on to work on other projects while the script that started the whole thing gathers dust?

The best exception to this that I know of is Travis Beacham’s spec A KILLING ON CARNIVAL ROW, which drew a lot of heat when it sold in 2005, then continued to garner praise while it languished in development for years before ultimately becoming an upcoming series on Amazon – at last check, anyway.

Budgets are getting higher, and the gap continues to grow between microbudget features and mega-budget tentpoles. It’s getting harder for original material to get noticed, let alone something that screams out “NEW!” It also doesn’t help that the chances decrease if the script isn’t based on pre-existing material. This could be why today you’re more likely to see an original film that’s a low-budget independent, probably written by the filmmaker themselves.

Before that, your best bet of seeing something groundbreaking would have been at the hands of established filmmakers, only because they had that kind of leverage (and the budget) to get their projects made. An unknown writer doesn’t have that kind of luxury. All we can hope for is to connect with somebody who likes the script (and our writing) so much that they’re actually excited to help us take things beyond the “Sure, I’ll read it” stage.

That’s our objective as writers: to write something that’s not only compelling and involving, but so eye-openingly original that the reader is compelled to the point that they need to see this as a movie. Doable, but definitely not easy.

Homework time! Part one – find a script you really consider a game-changer for the same genre as yours and give it a read. Can you identify what made it so unique? What really stands out for you? Plot? Story? Characters? A little of everything? Another option is if that script has been produced, then watch the film and follow along with the script. Are they the same? Totally different? Do you think the changes add or take away from the script?

Part two – without blatantly copying the style of that script, work on applying a similar originality to yours. Did reading that script inspire ways for you to make yours really stand out?

Don’t be afraid to take chances. Strive to offer up something we’ve never seen before. The results might surprise you, too.

-Special offer just for you! 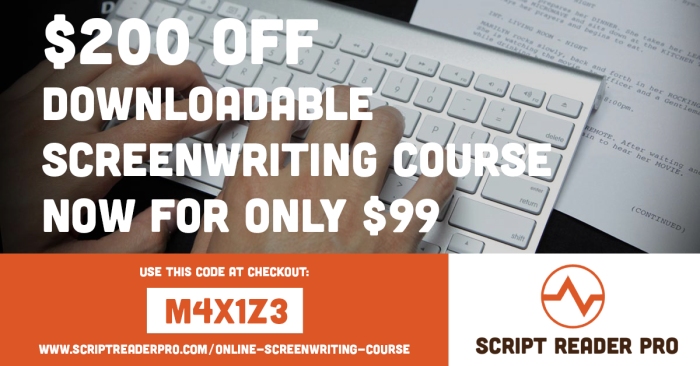 The fine folks at Script Reader Pro are running a discount for Maximum Z readers on their downloadable screenwriting course Script Hackr.

Forget all the confusing and vague “fluff” found in most screenwriting courses, coverage and books. Script Hackr will skyrocket your screenwriting skills by utilizing rarely talked about hacks and hands-on practical exercises to de-mystify theory.

You can check out more details on the course here: